2022 was a flagship year for our advocacy efforts on behalf of Calgary’s construction industry. We focused on familiarizing ourselves with the policy environment in Calgary while creating key connections with stakeholders in the City of Calgary, the Province of Alberta and the Government of Canada.

To that end, we’ve developed key relationships with Calgary City Councillors, the Mayor’s Office, the Green Line LRT Team, and other key figures in City Administration including the City’s Planning Department and Climate Strategy team.

We’ve also expanded our Provincial Advocacy and have connected with various Members of the Legislature and Provincial public service members at Alberta Infrastructure. 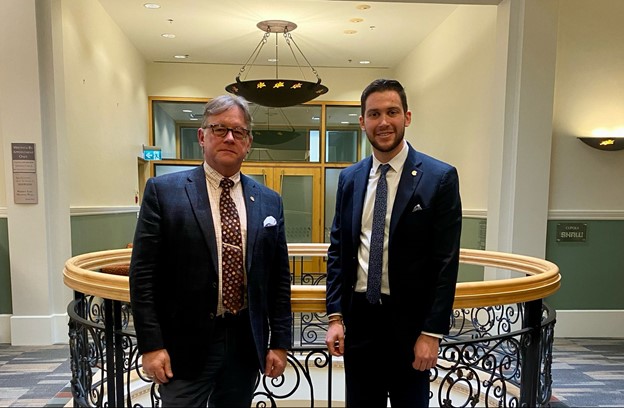 Here is an update on the positions we’ve taken in 2022, the results of our advocacy efforts, and what we can expect in 2023. 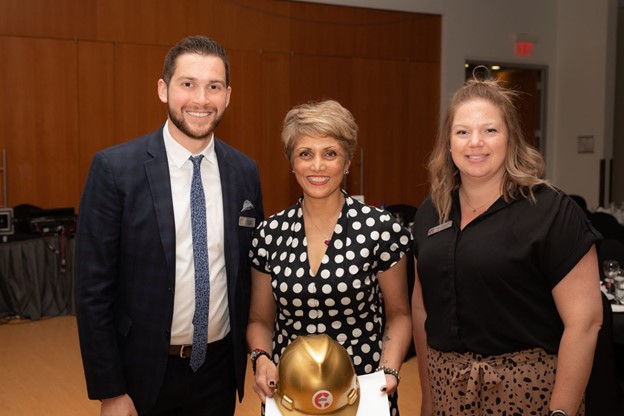 Our Positions on the Issues:

The Calgary Construction Association and its members have been engaging directly in dialogue regarding the Green Line Project with the City of Calgary and Alberta Transportation on behalf of industry and Calgarians for over three years. We categorically support this project as a significant element in Calgary’s continued growth and a stimulus for local industry firms.

In 2022, we were very vocal in expressing our concerns about the procurement of the project. Namely, we raised concerns about the Province of Alberta’s unilateral insistence on a single large bundled mega-project, which we believe substantially increases the cost risk to the project and ensures only foreign consortiums can oversee the project. Our position was that projects like the Green line LRT are for Calgarians – and should be built and managed by Calgarians. 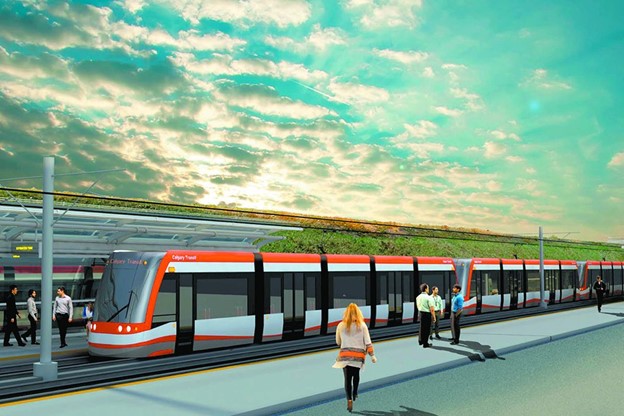 The Green Line LRT announced in August 2022 that two entities were shortlisted to oversee the project. We hope that the successful proponent ensures that local businesses, contractors and sub-contractors are well-utilized and engaged in the project. We’ve requested the Green Line LRT Team continue to engage our local construction industry and we are pleased that they have done so by hosting open houses and information sessions.

Why does it matter to us? The Green Line LRT project is the largest infrastructure project in Calgary’s history. Thousands of Calgarians will work on the project both during its construction and operation phase. Moreover, through initiatives like Transit-Oriented Development around new train stations, we can expect further commercial construction projects to begin around the Green Line LRT.

Towards the end of 2021, the City of Calgary declared a climate emergency and announced plans to develop a climate plan by the end of 2022. As a result, many of our advocacy efforts were set around ensuring that city officials kept the suggestions and concerns of Calgary’s construction industry top of mind as they developed their plans. For example, in our op-ed in the Calgary Herald in June 2022, we raised concerns about the feasibility of Calgary’s home retrofit plans, while offering practical solutions to begin addressing the issue. 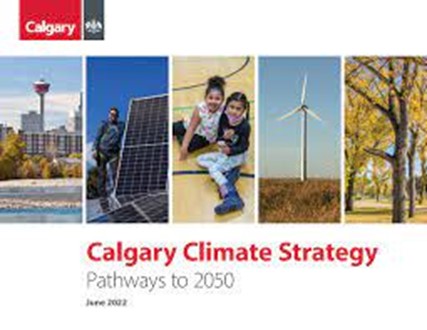 As a result of our advocacy efforts, we were pleased to see initiatives we supported be named in the City’s 2023-2026 operating budget. These include a ZebX-type model for demonstration projects to assess what kind of retrofit initiatives work and don’t work in the Calgary climate. We are further encouraged of course to see the development of programs like the Sustainable Infrastructure Capital Program, Sustainable Building Policy, and the Net Zero Priority Stream of the development approvals process.

Moreover, the Calgary Construction Association has been invited to participate in the Calgary Climate Panel, which brings together industry and community advocates in a common forum to discuss meaningful and actionable climate initiatives.

Why does this matter to us? The construction industry understands the importance of the role we have in reducing emissions. According to the City, energy used for building heating, cooling, lighting and power in the residential, commercial and institutional sectors contributes 57 percent of Calgary’s overall emissions. This issue needs to be considered in the context of both existing buildings retrofitted and new construction.

The Calgary Construction Association and many in our industry see an incredible opportunity for our resources, effort and technical expertise to be applied to the development of future strategies in the way we design, build and operate Calgary’s built environment.
________________________________

The success of Calgary’s downtown is imperative to the success of our whole city. City documents show 28 potential empty office buildings have been identified that can be converted to residential space, students or seniors housing, or other uses. We support Calgary’s Greater Downtown Plan to attract vibrancy and investment in our downtown core and offer our voice to provide expertise and leadership in the retrofitting of old space, building and material standards, and more. 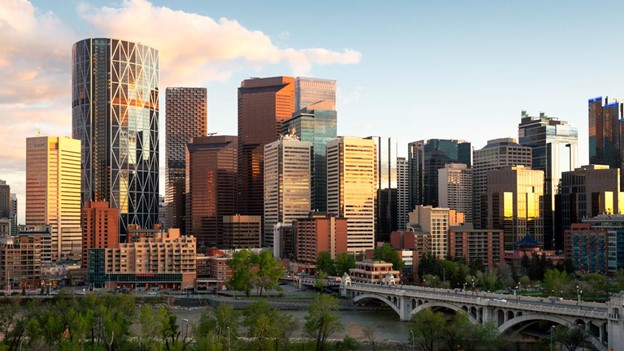 In Budget 2022, the Province of Alberta funded $5M of the City’s $250M+ ask for downtown revitalization. On March 21, 2022, the Province hinted that further provincial funding could be on the way. Our position remains that we encourage the participation of the Government of Alberta in fully supporting Calgary’s Downtown Strategy.

We fully support the build-out of the culture and entertainment district anchored by the BMO Centre Expansion, a proposed Event Centre, and Arts Commons Transformation. While these projects are important as they create jobs and economic activity for the local construction industry, the reality is we are excited to see the development of a district that all Calgarians can be proud of. The build-out of a Culture and Entertainment district is important as it adds to the culture and social fabric of our city promotes community building and sets Calgary apart as a destination to live, work and play.

The expansion of the BMO Centre remains on track for a 2024 opening, with the final steel beam put in place. In the past 11 months, construction crews have installed 9,000 metric tonnes of steel to form the centre’s structure, with the final 90-foot piece of steel set into place at the end of December. 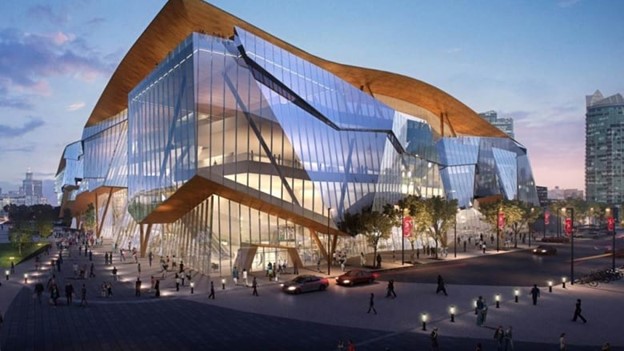 A rendering of the BMO Centre Expansion
In January 2022, we wrote an op-ed in the Calgary Herald on the Event Centre Agreement collapse and its impact on the construction industry and City building. Although we were concerned about the impacts of the delay, we are encouraged that talks on a new project continue.

In 2022, City Council struck a new committee to assess the feasibility of a new event centre. The committee members is chaired by Cllr. Sharp, and represented by Cllrs. McLean, Walcott, Deborah Yedlin from the Calgary Chamber of Commerce and Brad Parry from Calgary Economic Development.

The position of our Association remains that our industry’s voice on the matter cannot be ignored – and we will advocate that we are a part of the conversation on the project. To that end, we wish the committee well as it pursues negotiations for a new arena for Calgary. 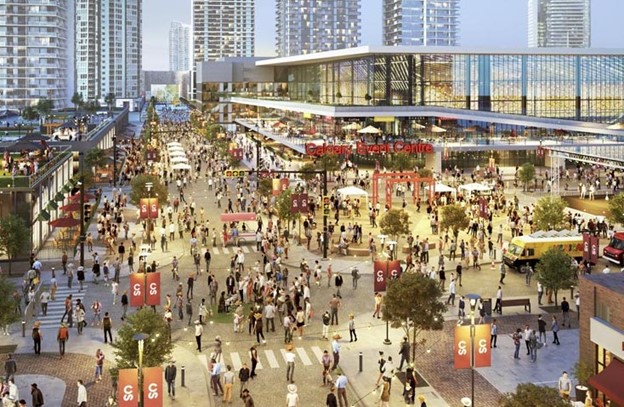 A rendering of what the proposed Culture and Entertainment District could look like
Issues on the Horizon:

The current skill shortage is one of the biggest challenges facing the construction industry and Its effects are being felt already. Baby Boomers with 40+ years of work experience are retiring, and Generation X and Millennials are seeking to step up in their roles. Greater emphasis needs to be made on attracting and retaining skilled workers to fill the looming labour gaps in the local Industry.

This issue is also being exasperated by the growth being felt in Calgary, the Province of Alberta and Canada, as a whole. Based on new targets by the Federal Government, we can expect 1.5 million new Canadians to join us in the next three years – or a conservative estimate of upwards of 50,000-55,000 net new immigrants to Calgary alone. This number does not reflect inter or interprovincial growth – so we can expect the number to be higher. Just last week, it was reported that between July and September of 2022, Alberta had a population increase of 60,000 people – its largest population increase ever.

Without an adequate workforce, this means that essential projects – like homes, schools, hospitals, power generation, roads, bridges and trade corridors that connect our communities not only to each other but also to the global marketplace – may be delayed or cancelled.

2023 is a provincial election year in Alberta – and according to the pollsters, it is going to be a very close one. To that end, we are actively developing relationships with policymakers from all of the major political parties to ensure that the needs of Calgary’s construction industry are heard.

Many areas of provincial jurisdiction uniquely affect Calgary’s construction industry. For example, a third of the funding for the Green Line LRT project came from the Provincial government. The Province of Alberta also oversees Alberta Infrastructure and is one of the largest purveyors of construction in the market, and is directly responsible for skills accreditation, investments in the trades and more.

Recently, the relationship between the construction industry and the Province of Alberta has seen rough waters. This was highlighted by the cancellation of the Deerfoot Trail procurement and the overall state of public procurement in Alberta. To that end, we will continue to advocate on the issues around public procurement, regardless of who wins the election.

Stay in Touch!
If you have issues, questions or concerns, about our advocacy please feel free to reach out! I can be reached by email at franocavar@cgyca.com