via Edmonton Journal  By Lisa Johnson 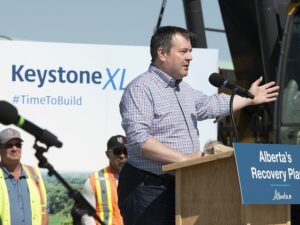 Premier Jason Kenney announced $11.8 million towards infrastructure projects in Camrose as he continued his string of summer funding announcements around the province Tuesday.

Camrose will receive a $10.2-million provincial grant to go towards a $38.8-million upgrade of its wastewater treatment plant. The project is expected to begin construction in early 2021 and be completed in 2023, supporting 20 direct and 16 indirect jobs.

The city about 100 kilometres southeast of Edmonton will also receive $1.6 million toward the $2.2-million cost of resurfacing its airport runway, a project the government said will be complete in 2021 and support five direct and three indirect jobs.

The projects are part of the province’s COVID-19 economic recovery plan, now totalling about $10 billion in infrastructure spending, including an initial $1.5 billion investment in the Keystone XL pipeline. Alberta’s most recent February budget allocated $7 billion to infrastructure.

Kenney repeated his government’s focus on attracting businesses investment to spur the economy during the pandemic.

“Everything we’re doing now to get Alberta through the crisis is paid for with debt, and today’s deficits are tomorrow’s taxes,” said Kenney.