CCA would like to congratulate long time member Chandos Construction on this very big occasion!

Keep reading to find out how Chandos Construction has evolved over the past 40 years.

Since our inception, we’ve completed more than 2,000 projects. We committed to inclusive hiring – a practise that nurtures diverse talent and attracts women, Indigenous peoples, new Canadians, LGBTQ2S+ and youth to the construction industry. Everyday we look for more ways to use our business model to build a better world.

We’re taking it back to 1990 in celebration of our 40th anniversary.

Our co-founder Dan O’Brien was 30 years old and a structural engineer when he decided to start Chandos. He approached construction manager Don Coyne during a joint venture on the Commonwealth Stadium in Edmonton and asked him about starting their own company. They went on a fishing trip to discuss details and quickly realized they had similar values.

They decided to build a construction company that was different. It would be client and family focused. It would benefit the communities they served. They each put up $30,000 to kick start the company. Dan would run their small office and Don would go into the field.

Their first project was a strip mall on the corner of Argyll and 99 Street in the City of Edmonton. The value of the project was ~$800,000 and it gave them a lead into their next jobs.

With several projects under our belt, we started curating the philosophy of “Creating Value Beyond Price.” It stemmed from innovation – which has become a core value for us – and was about exceeding client expectations and offering more than just a competitive price. We wanted to make the client the focal point of our organization, and differentiate ourselves in the industry.

Our company logo also evolved. The ‘C’ in motion represented the openness, collaboration, unity and inclusion of our culture.

During this time, we completed 480 projects. Don retired and Dan hired Tom Redl who would eventually become his successor. 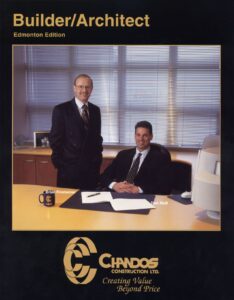 Having cemented our position in Edmonton, we set our sights on the construction market in Southern Alberta and open