On July 17th, Calgary Construction Association, and members of our Young Construction Leaders (YCL) group were invited to tour 2 of the eight City-owned properties, designed in partnership with Calgary Housing Company adjacent to 16 Ave NW in Rosedale. 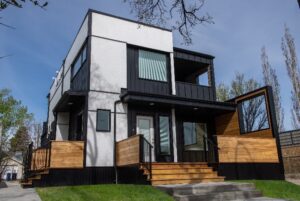 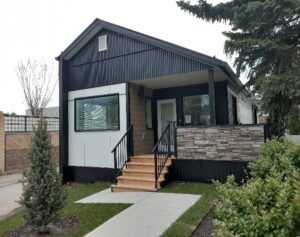 Photo credits: The City of Calgary

While the affordable housing units are constructed on lots owned by The City of Calgary, they are managed by the Calgary Housing Company, which is in-charge of over 10,000 housing units with more than 25,000 tenants living within a number of mixed income housing units. The multi-family units placed in various neighbourhoods all around the city, are meant to house up to 50 Calgarians in the 16 new homes. This is a new and innovative project that has made tremendous advances in bridging gaps between residential developers and CHC to provide energy-efficient, minimum maintenance and accessible residential units for low-income families.

One of the two homes visited on 16 Ave NW was a barrier-free unit; accessibility features include a 20-foot ramp, adequate knee space under counters and units built to accommodate created through a unique design and constructed in a way that blends into the character and personality of neighbouring homes. The 16 homes have multi-units, designed in a variety of configurations to house anywhere from single families to families with 3 to 4 children. The homes come in 6 one-bedroom units, 5 two-bedroom units, 2 three-bedrooms units, as well as three barrier-free units.

Uniquely designed to make use of the leftover land following the widening of 16 Avenue NW, tenants can rent units at rates closer to what is on the market or one that is subsidized based on their qualifications. Each of the new homes are built as modular units capable of stacking, which were prefabricated in Edmonton, and delivered to Calgary for the final assembly. This was done to expedite construction and reduce the traffic and disruption caused by more traditional building operations on the residential streets, which was a commonly expressed concern by the residents of Rosedale.

Despite some initial hesitation from residents of Rosedale, the final units as well as the initiative are a positive addition to the neighbourhood, and this sets a great precedent for future opportunities in the city. The site for units were determined with proximity to transit, employment services, grocery stores, schools and recreational areas like public parks and restaurants. In addition, each unit will save 5-11% more energy, with the use of WaterSense toilets, sinks and showers and there were no invasive plants on the