Calgary Green Line costs will only continue to skyrocket: CCA

via Journal of Commerce by ConstructConnect by Grant Cameron 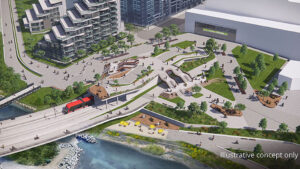 The Calgary Construction Association (CCA) maintains the price tag for the city’s ambitious $5.5-billion Green Line LRT system will rise significantly because it has been mired by numerous delays, cancelled procurements and missed construction windows and, as a result, failed to capitalize on a better cost climate.

Moreover, the organization states despite many assurances to the contrary, experts in the industry know first-hand tunnelling proposed downtown can be risky from both a scheduling and cost perspective.

Builders are also worried the province’s insistence on bundling the work as a large megaproject will increase the cost of the light rail system and ensure only large foreign consortiums can oversee the venture.

“The alarming reality is that the recent decision to reverse the course of smaller packages has effectively not only deferred obtaining cost certainty on the less complex leg of the line but has also prevented getting local companies to work on this shovel-ready piece of the project now,” a CCA statement reads.

Projects like the Green Line LRT are for Calgarians – and should be built and managed by Calgarians, CCA states.

“We remain hopeful that the Green Line LRT board can engage with our industry and work to achieve a project on time and within a realistic budget.”

A recent report to city council’s executive committee raised concerns about cost escalations of the project.

Don Fairbairn, chair of the Green Line board, expressed doubts about being able to deliver the first stage of the project within available funding. A financial summary showed the city spent approximately $706 million on the project’s development as of Dec. 31, and that the project budget is under pressure because of cost escalation, design development and schedule updates.

The first phase of the project would see the Green Line LRT built from Shepard in the southeast part of the city to Eau Claire in the downtown. The second phase would continue the line on to 16th Avenue North.

The project is the largest infrastructure investment in Calgary’s history and is being funded by the federal, provincial and municipal governments. The first phase of the project is expected to be completed in 2027.

CCA president Bill Black said the organization supports the project as a major element of Calgary’s continued growth but noted megaprojects traditionally go into the red due to cost escalations and because budgets are often set before the scope of the project is defined.

“This project will go over budget. We’ve spent over $700 million already of the original approval and there’s not a track in the ground. The value of a dollar now versus three years ago is also less so the delays have added to the cost risk.”

Delays in the project have resulted in costs going up over time and the fact work is bundled into a larger venture only adds to the problem because it limits the companies that can bid, said Black. The city had been breaking the work down into smaller packages, but the province has insisted that the work be bundled.

The CCA maintains foreign consortiums are notorious for going over budget, leaving unpaid bills and having legal problems.

Acciona Wastewater Solutions LP, for example, a Spanish company that was chosen by Metro Vancouver to build a new North Shore Wastewater Treatment Plant, was fired last fall because the municipality lost confidence in the ability of the contractor to complete the project.

The contract was terminated after Acciona laid off 200 workers. The company claimed it was owed $95 million for work on the latest phase of the project.

Black said he would like to see a more open, realistic conversation about the scope of the Green Line project and transparency in understanding the risk.

The project involves tunnelling through some of the worst type of geology, so there is no way to avoid risk, he said.

“This isn’t building a six-storey building where you could probably predict plus or minus five per cent.”

The CCA has been raising the red flag for three years but hasn’t had much response. Black would like to see the project broken down into manageable pieces so there is opportunity for more local involvement and for there to be a real conversation about tunnelling.

Black said the public has been apathetic to the cost of the project, perhaps because the numbers are so large, but to put it in perspective he noted the cost of the venture is equivalent to building five new arenas.

“Now maybe there’s some perspective on just how much money is at stake here and how much we need to be sure we’re getting this right and not be led down the bundling path by a bunch of people who, for one reason or another, seem to be addicted to bundling. The only people that benefits is foreign consortiums.”