In Memory of Paul Hugh Polson 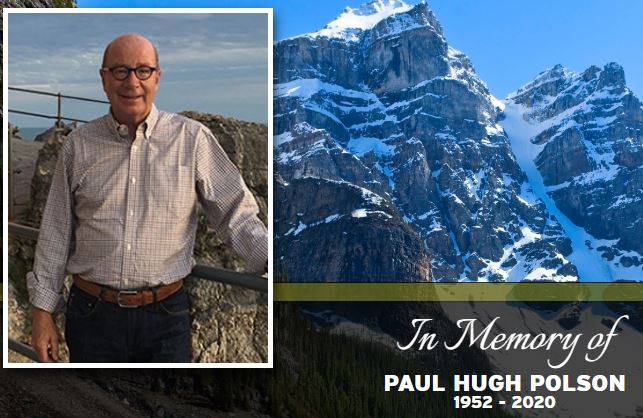 Paul Hugh Polson, best grandpa ever (“Papa”), incredible father, loving husband, community activist, devoted colleague, stampede cowboy, travel fanatic, golfer, and best friend, passed away on Friday, July 17, 2020 at the age of 67 years. Paul was beyond strong and fought his hardest, but after what felt like running a full marathon, he crossed his last finish line with grace.

Paul was born in Winnipeg on September 30, 1952 to parents Edith Polson (Hodgson) and James Polson. Paul has one sister, Janet Cartwright (husband Ray). Paul grew up in Calgary and was actively involved in a variety of sports and community groups his whole life. He played lacrosse, volleyball (in high school and SAIT), and baseball (Spikes in the FMBA). He was a Queen Scout with the Boy Scouts of Canada. He enjoyed climbing, hiking, downhill ski racing, and cross country skiing.

Paul was an avid runner. He could be found each morning, around 5am, lacing up his sneakers and heading out to run alongside the ridge in his community of Rosedale. He ran several races in his life, with a personal best half marathon time of 1 hr 38 min. No matter where in the world Paul was, you could be rest assured that he was hitting the pathways and enjoying the fresh air.

Alongside his wife, Laurie, Paul travelled extensively all around the world. Wherever he went, he journaled (sketching, writing, and scrapbooking anything from plane tickets, to business cards, to wine labels). He drank wine in Italy, played golf in Australia, Scotland, Vietnam, and Thailand (to name only a few), saw the elephants in Africa, road tripped through Portugal, and ate Moules-frites every opportunity he got. His sense of adventure led him to experience annual fishing in the Queen Charlotte Islands, heli-hiking in the Bugaboos and ziplining in Costa Rica.

Paul was devoted to and absolutely loved his work. An architect by profession, he practiced in Alberta for twenty-two years. His career started with Laird Snow which became Laird Polson Architects in 1983. In 1997, they merged their practice with two other architectural firms and became the first architectural team in Stantec. Paul led this new architectural team at Stantec for the next three years before joining Stuart Olson in 2001 as Vice President of Business Development. In 2014, he became the Senior Vice President of Business Development and Community Engagement. He was admitted to the Royal Architectural Institute of Canada’s College of Fellows in 1992 and was Dean from 2005 to 2010. Paul had a profound impact on everyone that he met and worked alongside. The way in which he genuinely connected and collaborated with people will never be forgotten and is part of his legacy.

Paul was a strong community activist, and spent many years of his life serving different organizations around the city. He called it ‘giving back’ and loved every minute of it. Paul volunteered at the Stampede for over thirty years, and was on the Board of Directors for the Calgary Stampede from 2010 – 2020. Paul had an entire wardrobe of Stampede attire, and loved every moment spent at the rodeo. He was on the board of Theatre Calgary, and a member of the Dean’s Advisory Council for the Faculty of Environmental Design at the University of Calgary and SAIT Polytechnic.

Paul married the love of his life, Laurie, forty-five years ago, after five years of dating his high school sweetheart. What started as a dare that he could not land a date with Laurie, turned into a lifelong romance full of adventure, laughter, and a lot of love. Together, Paul and Laurie had three sons, Tyler, Graham, and Jordan, who have gone on to marry (respectively) Andreanna, Judy, and Sara. Paul was incredibly proud of each of his sons, and anytime he spoke about his family, you could see a twinkle (and maybe a tear) in his eye.

Paul took extreme pride in his two grandchildren, Rory and Colin. He loved sharing popsicles and ice cream cones alongside Rory, and holding (and bouncing) Colin on his lap, which always brought a smile to his face. Paul also loved his fur-grandson, Gilmore, who he called “pumpkin pie.” He will miss bantering back and forth with his mother-in-law, Thelma Ball, travelling alongside his sister-in-law Jan Ball, and visiting with sister Janet (and husband Ray), as well as his nieces and nephews at the annual Polson Christmas potlucks.

Anyone who has ever met Paul knows that there is not another genuine soul like his around. He was the kindest, gentlest, most sincere man. He loved with his whole heart, and took care of everyone around him. Paul was humble and found joy in the simplest moments of daily life, and had the best dry-wit sense of humour.

Paul would want us to thank his medical team at the Tom Baker Cancer Center, his palliative care team, and PeraMed nurses. We are so grateful for their compassionate and meticulous care.

During this time of Covid-19 safeguards, the family is having a small private celebration of life. Condolences, memories and photos may be shared and viewed on Paul’s obituary at www.McInnisandHolloway.com. If friends so desire, in lieu of flowers, please consider donating to a charity or a community initiative of your choice in his memory.

We will all feel an empty spot in our hearts that only he could fill. Paul would want us to fondly remember the good times we had with him, and to raise a glass (of excellent red wine or double smoked whiskey) to him.